In Search of the Northern Lights

In Search of the Northern Lights

In search of the northern lights

There are few things as beautiful as Northern Lights dancing across a dark night sky. Sometimes they are bright and swift—sometimes faint and quiet. A dynamic display of Northern Lights can be a unique life experience.   Northern lights are only visible during the dark part of the year, between late August and early April. In the summer months, it never gets dark enough to see the lights. This means that the northern lights season has now formally started. Yay!

Luckily, Iceland is among the best places in the world to enjoy the show. Armed with a little bit of knowledge, warm clothes, and patience, you can multiply your chances of seeing them while traveling.

How are northern lights made?

The short and simple version: the Northern Lights are formed when charged particles from the sun excite oxygen and nitrogen atoms and molecules in the earth's upper atmosphere, causing them to glow.

To see Northern Lights, the sun must be hurtling those particles towards us, and the skies have to be dark and at least partly clear.

Our sun is surrounded by a cloak of plasma called the corona, which is like an atmosphere but mainly made up of electrons. These electrons flow away from the sun to form the solar wind, giving birth to the space weather.

The corona is ever-changing. Occasionally, the corona opens. Fast-moving solar wind particles are flung into space. This is key to the formation of northern lights.

When the wind speed is between 500-800 km/s (300-500 miles/s) or higher, geomagnetic storms are very likely to occur, as long as it's bombarding the earth. How bright, colorful, and dynamic a northern light's display is dependent on how powerful the solar wind is. That's why it's essential to keep an eye on the solar wind speed when looking at aurora forecasts.

What happens when the particles reach earth?

When the earth is being bombarded by the fast-moving solar wind, the earth's magnetic field begins to flutter. It becomes turbulent, like clothes hanging on a line on a windy day. These turbulences are measured locally, which is very useful when you are outside and can be checked at auroraforecast.is. 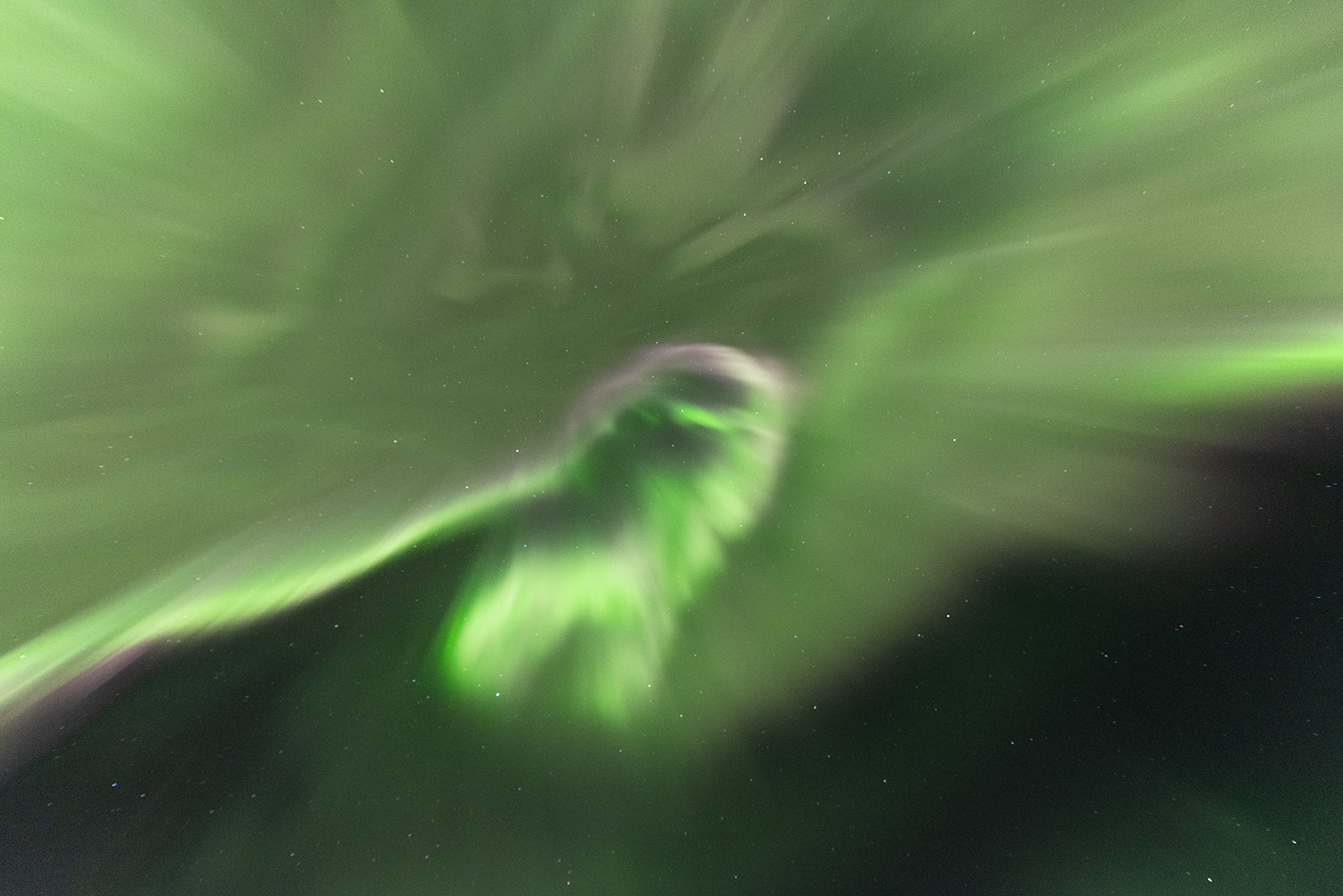 Earth's magnetic field funnels and accelerates the solar wind particles towards the poles. At roughly 100 km (60 miles) altitude, they collide with atoms and molecules of oxygen and nitrogen in our atmosphere. When these atoms and molecules become excited, they ionize—or radiate light—the northern lights.

Different colors come from differentially excited atoms and molecules. The most common color is the pale green light of excited oxygen. Violet hues stem from nitrogen, and the red color, often barely detectable with the naked eye, is more visible in photographs.

Which reminds me. You will probably never see the auroras the way they look in photographs. Cameras are simply much more sensitive to faint light than the human eye. To the unaided eye, the auroras will look soft and pale green most of the time unless the display is very bright.

When you're setting out to look at the Northern Lights, you will likely find forecasts quoting the Kp-index values.

Many people think that they predict the brightness of the Northern Lights or the likelihood of seeing them. This is not the case. The Kp-index is an average of magnetic field disturbances caused by the solar wind, measured at different locations worldwide over three-hour intervals. It nevertheless provides a reasonable estimation of how powerful the Northern Lights are likely to be.

High magnetic disturbances are often accompanied by rather impressive Northern Lights. If the Kp value is 0, a faint glow can often be seen in the northern part of the sky above Iceland. A camera is much better at detecting them than the human eye.

When the Kp value reaches 2 and 3, beautiful auroras can be seen overhead in Iceland. Auroras get much more colorful and dynamic when the activity level reaches 4 and 5. The most dramatic auroras are seen when geomagnetic storms occur, giving a Kp-index of 5 or higher.

Disturbances can be forecast more than a month in advance by monitoring the coronal holes, which repeatedly send us a fast solar wind, sometimes for months on end. That's because the sun rotates every 27 days around its equator.

Why is Iceland so well suited to see Northern lights?

On earth, the best places to see auroras are in the so-called aurora zones. These are two huge doughnut-shaped belts that circle the Arctic and the Antarctic. They form where charged particles flow in along the magnetic field lines towards the magnetic poles. Earth's atmosphere keeps them from penetrating lower than roughly 100 km (60 miles).

Luckily for us, Iceland is in the aurora zone. It is in one of the best places in the world for seeing the beauty of the Northern Lights, which are visible almost every night. Almost. 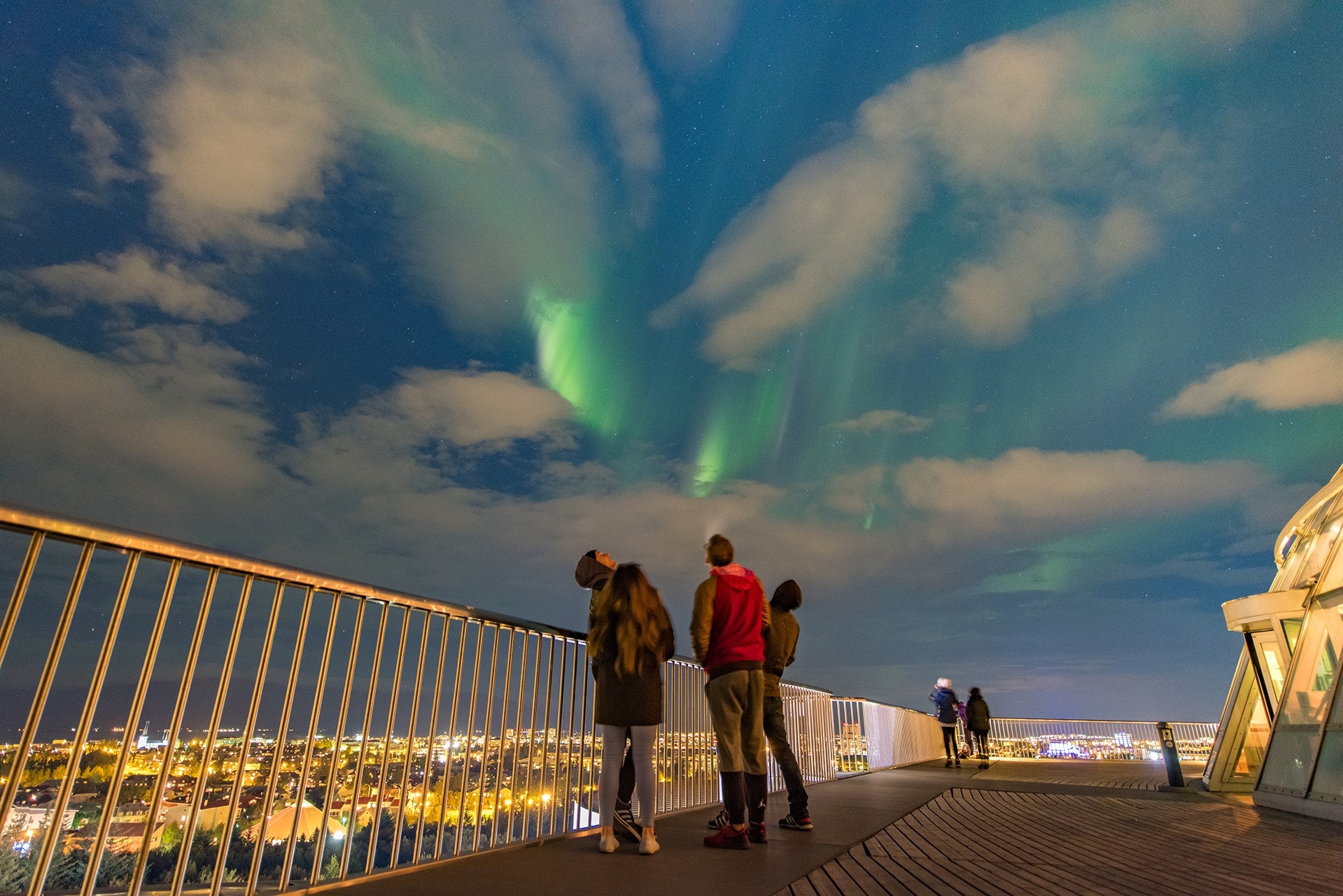 When and where to see the northern lights

Perhaps surprisingly, the northern lights seem to love to appear close to the equinoxes. Observations indicate, on average, you are about twice as likely to see auroras around the equinoxes than around the solstices. So, on average, the months of March/April and September/October are often the best bet.

But don't worry if you are visiting sometime in the winter between October and March. Auroras are readily visible from Iceland from late August until late April. Obviously, one cannot see any auroras in May, June, and July due to the near 24-hour daylight.

Another thing to keep in mind is that although auroras can be seen from dusk till dawn, on average, they most often appear around 11 PM. So, when you are outside chasing auroras, preferably stay out between 10 PM and 1 AM, and you have a better chance of catching them.

Heading into the darkness

Now that we have primarily covered the main points with Northern Lights, you are ready to head out and hunt for them. Remember, by far, the most important thing is to dress warmly!

Make sure to visit  auroraforecast.is for the local cloud cover forecast and space weather data. This website has everything you need.

Be patient! Sometimes you may have to wait for a few hours for the auroras to appear. While you wait, remember you can enjoy some other spectacular sights up there. All you need to do is look up!

Hot ideas from a cold country

5 good reasons to work in Iceland