'Tis the season for the annual sheep roundup!

Iceland's annual sheep roundups have been closed to the public for the past two years due to Covid. Now is the ideal time to see an Icelandic tradition first-hand, with réttirs taking place across Iceland throughout September.

A crispness in the September air signals the end of summer in Iceland. Day and night are equal for a short time before the long winter darkness settles in. Across Iceland, September also signals the traditional and annual réttir (pronounced, rhett-tur) sheep roundup. Réttir is a collective effort of farmers, landowners, and communities. Together they locate and herd all of the free-range grazing sheep back to large pens to sort them back to their farms before the snow flies.

About 386,000 sheep roam Iceland—about one per Icelander! 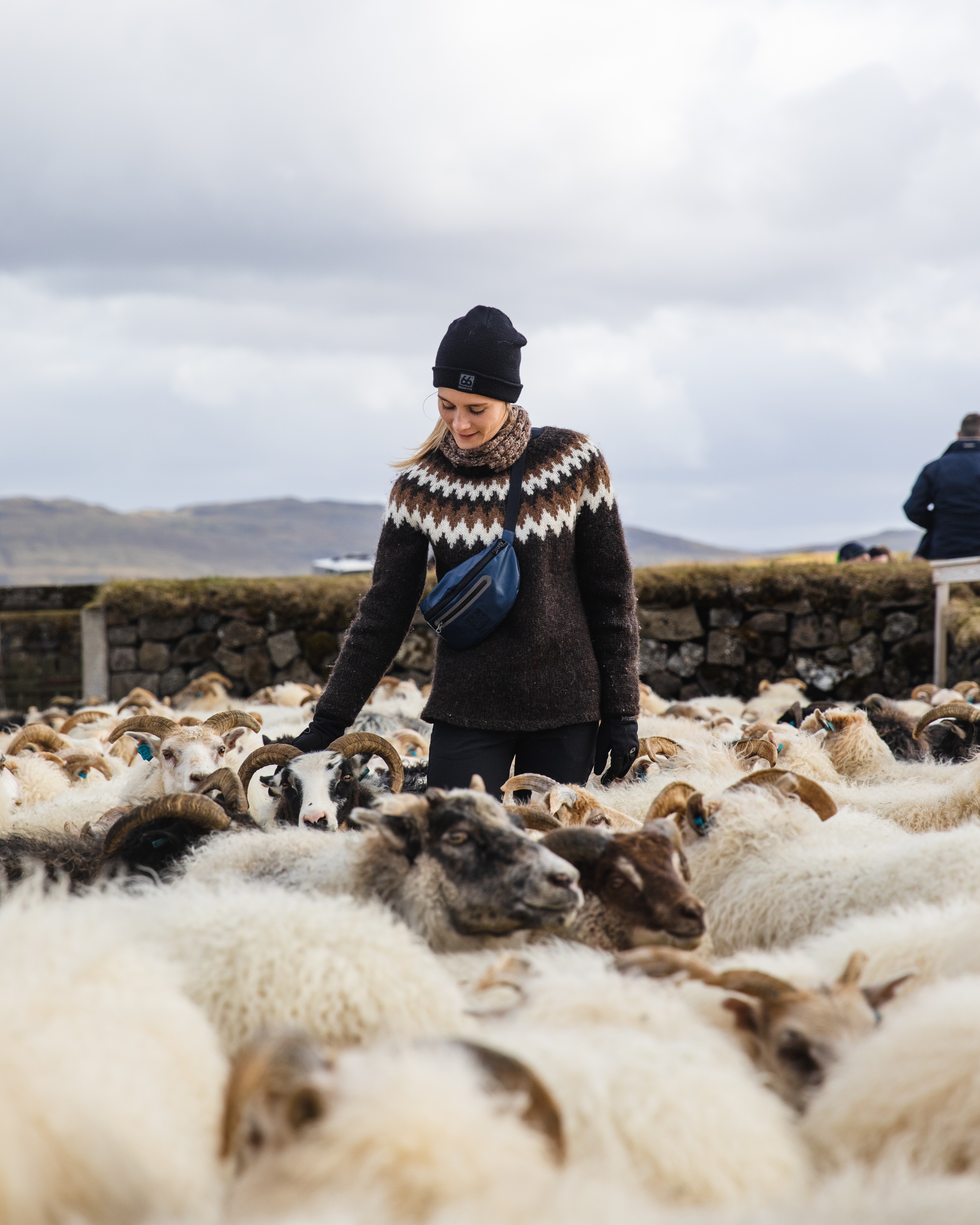 Lambing season generally begins in May, when farmers are frantically busy helping ewes safely give birth to the little lambs. Farmers shelter ewes and lambs in the barns to provide them with a head start to protect them from the often harsh Icelandic spring weather and roaming arctic foxes. As soon as the grass turns green and the lambs are ready, they are herded away to free-range graze across the countryside. Anyone who has been to Iceland will undoubtedly recall seeing sheep grazing in meadows, often perilously close to roadways. Many sheep follow the greening grasses into the highlands revealed after melting snows and are often quite far from the farms of their birth.

While réttir is more of a celebratory occasion these days, its original intent was an important event that meant surviving the winter. The first settlers of Iceland brought over sheep around the year 874, and the breed has changed little since then.

To say the least, these sheep are hardy, able to survive and thrive in the Icelandic conditions, but they still need to be rounded up before winter. In settlement times, finding your flock at the end of the summer meant food and warmth for the winter. To this day, almost every part of a lamb is used. Wool, meat, bones, and even sheep dung were all crucial to enduring the long winters.

Réttir starts in the northern parts of Iceland and moves further south throughout September. Settlers of Iceland would have gathered the flocks on horseback and foot from the highlands, perhaps with some canine assistance. A process that may have taken weeks. Today, horses and people on foot still play an essential role in réttir traversing the rough and often sloppy ground. Even with support from ATVs, tractors, and enormous American-made trucks with trailers, réttir can still take days.

(L to R) People of all ages work together to sort all the sheep. Bird's eye view of a "rétt" where the sheep are gathered and sorted to pens belonging to specific farms. Photos: Gunner Freyr/Iceland Explorer.

Historically, the pens—or rétt—were made of stone or turf. From above, they look like a giant wheel with spokes radiating out. (Keep your eyes open, and you can still spot old réttir sites across Iceland) Today, rétts made of metal rails are more common. The sheep are herded into the large central pen and sorted by farm into the "spokes." 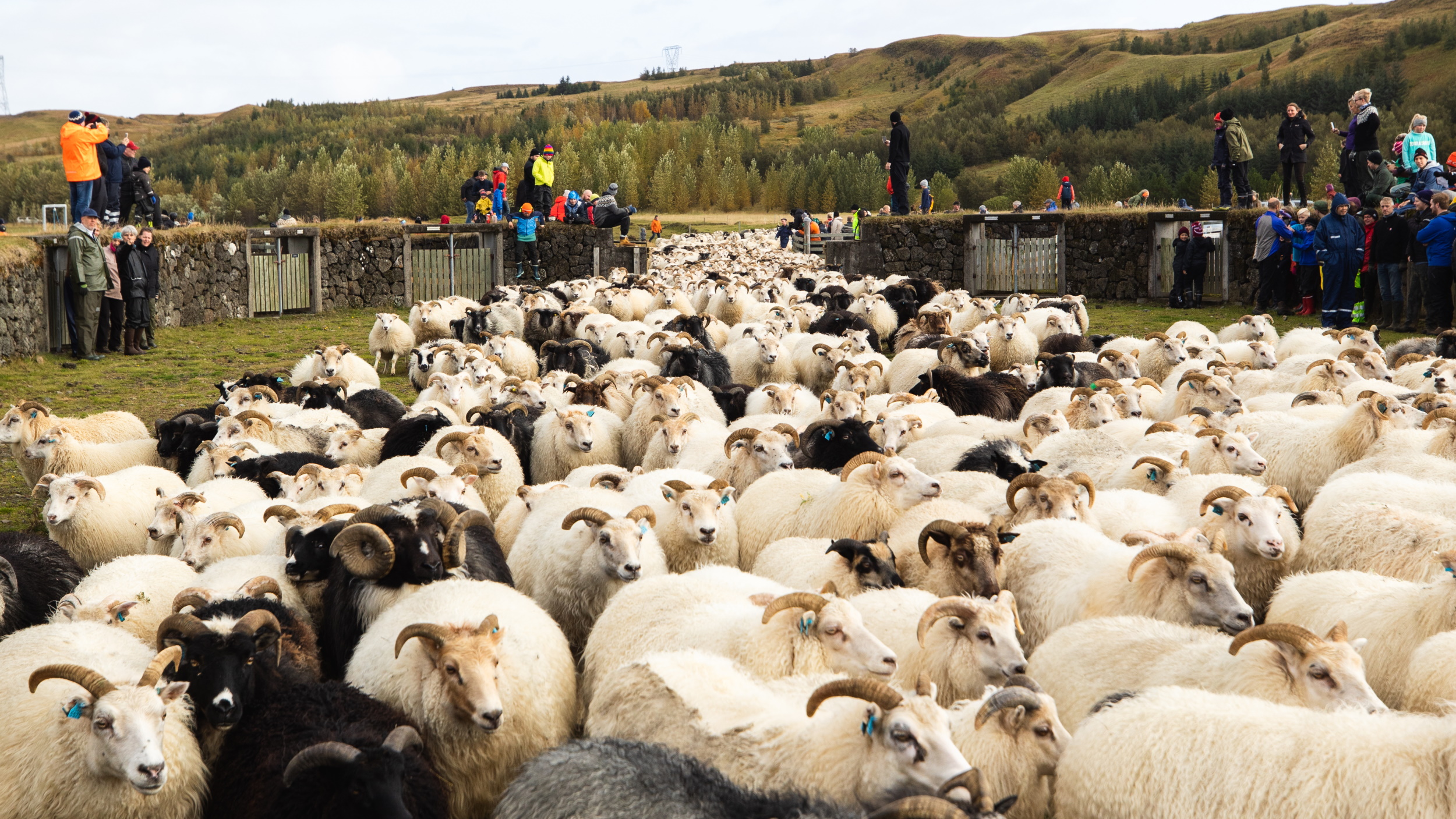 Herding the sheep into the main "rétt" or pen for sorting.

It is a sight to behold. Now plump and strong from summer grazing, the lambs scurry about in quick confusion. People of all ages—including surprisingly young children—wade into the sea of wool. Each animal is sorted according to a mark or tag on their ear to the farm they belong to. It is frantic work but comes together as people cooperate and find their flow with the animals. Towards the end of the day, when most of the lambs are sorted, there is plenty of celebration. Cake, coffee, and twisted kleiner doughnuts are passed around in great quantity. Impromptu singing often breaks out, and wool-clad farmers and muddy riders on horseback tip flasks back. All rejoice on a well-done job and that there will be enough to eat through the winter!

We highly recommend seeing a réttir if you happen to be in Iceland. It is a fascinating mix of tradition, controlled rowdiness, and a window into Icelandic history. Bændablaðið, the Farmer's Newspaper (in Icelandic only), annually publishes the dates of réttirs around the country. Many tour companies offer trips to participate in the roundup for those looking for some saddle time. Just remember—while the roundup is fun to watch, please respect the sheep, the farmers, and all those participating in the réttir by minding the boundaries and not hampering the action.

Let's talk about the Horses of Iceland