The cliffs of the Westman Islands, where the pufflings rescue happens!

Puffins are the beloved bird of the summertime in Iceland. These clumsy cuties spend their summers in Iceland and are sought out by many. But where is the best place to spot them? Inspired by Iceland collaborated with Kyana Sue Powers to find the best puffin watching experience.

The volcanic islands off the south coast of Iceland, known as Vestmannaeyjar or the Westmann Islands are home to the biggest colony of puffins in Europe. There are many beautiful hikes and adventurous activities on the Island. In late summer you will find the community and visitors participating in puffling season. A long tradition on Vestmannaeyjar, the puffling rescue season is one for all ages. 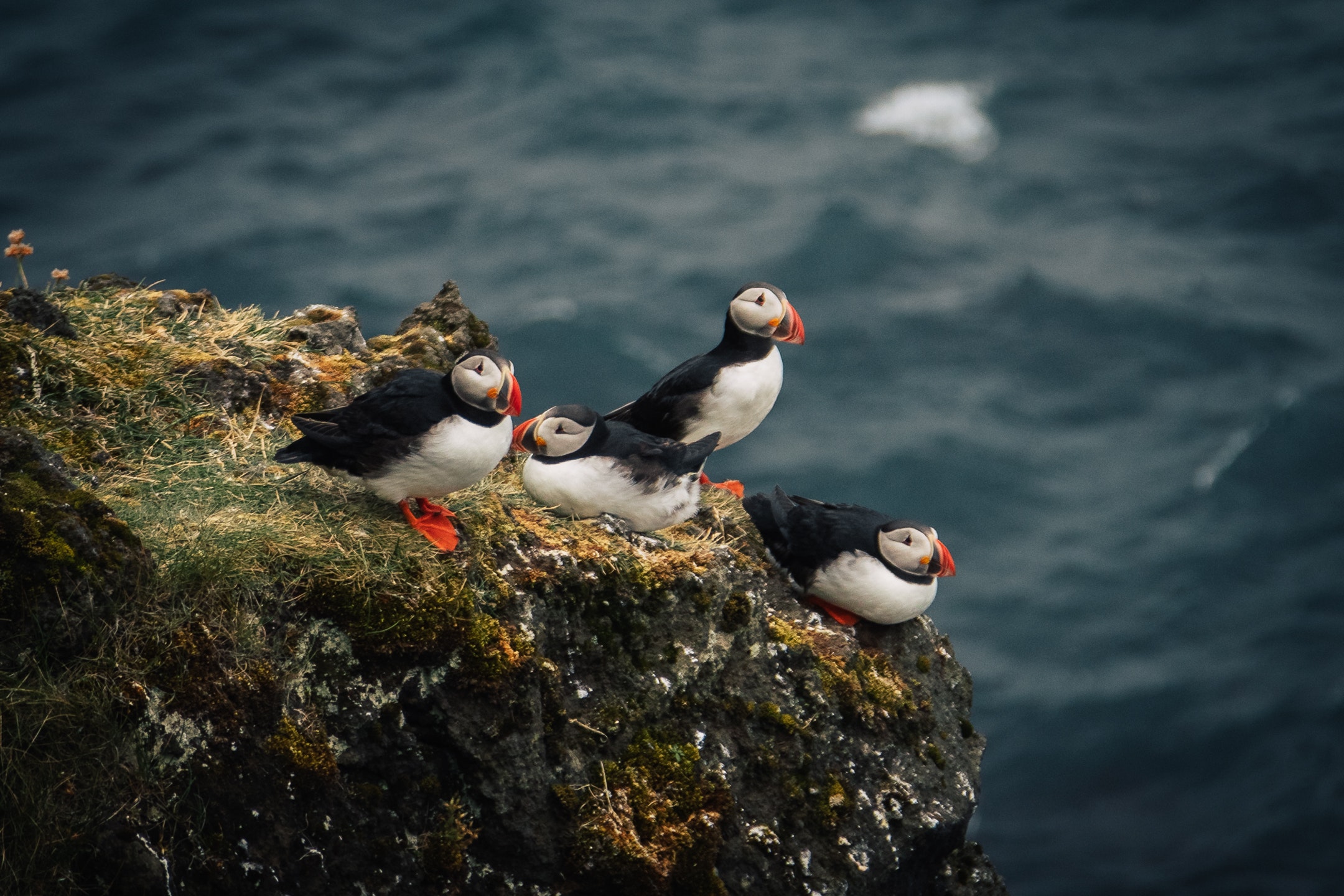 After hatching, puffins fly to the ocean, where they will live for the next 3-4 years of their lives. Each night, pufflings jump from their burrows high in the cliffs and set off toward the moon to find the sea. The city lights of the Westman Islands are often confused as the moon by the pufflings. This causes them to crash into the street and harbor of the island.

The pufflings’ wings are too weak to take off again so they end up stranded on the island. People of all ages wander the streets every night searching for puffins to rescue. It is common to see families walking or driving around with a cardboard box full of pufflings. While the streets aren’t littered with puffins, any given search team can easily find 4-10 pufflings a night.

Once a puffling landing has been spotted, it’s a race to rescue the little ones before they disappear or get stuck in small cracks. They can even be spotted waddling down the streets or lost in a neighborhood garden. This wholesome activity brings the whole community together.

The nights can resemble halloween, with groups of kids, adults, and families wandering the streets collecting pufflings. There is even a boat in the harbor with long nets to scoop up the pufflings that land in the harbor. Though they are headed out to sea, the oil in the harbor will be too heavy on their new feathers and they will ultimately drown.

Picking the pufflings up do not harm them and they are only kept in a box until the next day. The pufflings are brought to the south side of the Island. The location can be found on Google Maps as “Beautiful Puffin and Shore View.” The cliffs and air are dotted with hundreds of adult puffins and families can be found releasing their puffins one by one into the wild.

Children of all ages and adults, hold firm to the pufflings as they throw them high into the air above the sea cliffs. Once the pufflings hit the air their wings flap rapidly and they take off towards the ocean. Occasionally a lazy puffling will flop to the group and hobble off the cliff but they instinctively begin to soar as they fall through the air.

Once it’s dark out, it’s back to the streets searching for more confused pufflings who accidentally landed on Vestmannaeyjar. This tradition has been going on for decades and thousands of puffins have been saved this way from Vestmannaeyjar.

This article was written by Kyana Sue

This article was written by Kyana Sue

Kyana Sue Powers is an outdoor photographer specializing in adventure and lifestyle.