Icelanders are very keen to tell you that they speak the language of the Vikings. This is not an exaggeration. While Icelandic is the official language, it would be hard to find an Icelander that does not speak English. Or many other languages, for that matter. The language proficiency of Icelanders dramatically simplifies the transition and integration of foreigners into Icelandic society. However, the Icelandic language binds the nation together and is something they steadfastly work to preserve.

An Icelandic language committee devises new words to protect the language rather than adopt, for example, the English word, as many languages tend to do. The word "computer" is a classic example. Icelanders created the word tölvu, which translates as "number prophetess" to embody what a computer does in their language. Interestingly, there are no regional dialects and only slight accents in Iceland. Therefore, some Icelanders may find it challenging to understand foreigners speaking Icelandic because they are not used to hearing their language spoken with any sort of an accent. Icelanders are adapting as more foreigners settle here and take up the language.

"The Icelandic language binds the nation together and is something they steadfastly work to preserve."

Here are 8 interesting facts about Icelandic:

1) Settlers arrived in Iceland around 874 from Norway speaking Old Norse—the root of modern Danish, Swedish, Norwegian, and Faroese. Due to isolation, Icelandic remained well preserved. At the same time, the other Scandinavian languages mixed and evolved into what we know today.

2) When the time comes to name a child, parents must stick to a list of approved first and middle names. These are names that conjugate according to Icelandic grammar. There are over 1,800 options for girls and 1,700 for boys. Suppose they want to give their child a name that has not been previously used in Iceland? In that case, they must send in a request to the Icelandic Naming Committee.

4) Modern Icelanders can read the manuscripts written in Old Norse between the 10th and the 13th centuries, such as the Eddas and Sagas. Try that in Old English!

5) Icelanders are incredibly efficient speakers. Listen carefully, and you will hear them speaking normally and then continue speaking while inhaling without a pause!

7) For the translation of movie titles, Icelanders should win an award for creativity! For example, Lethal Weapon (1987) is Tveir á toppnum (Two at the Top). Indiana Jones and the Raiders of the Lost Ark (1981) is Innrás týndu arkarinnar (Invasion of the Ark). Die Hard (1988) is Á tæpasta vaði (Take a lot of risk), and The Matrix (1999) Bylt fylki is a complex math term that no one uses, so they defer back to just saying The Matrix! 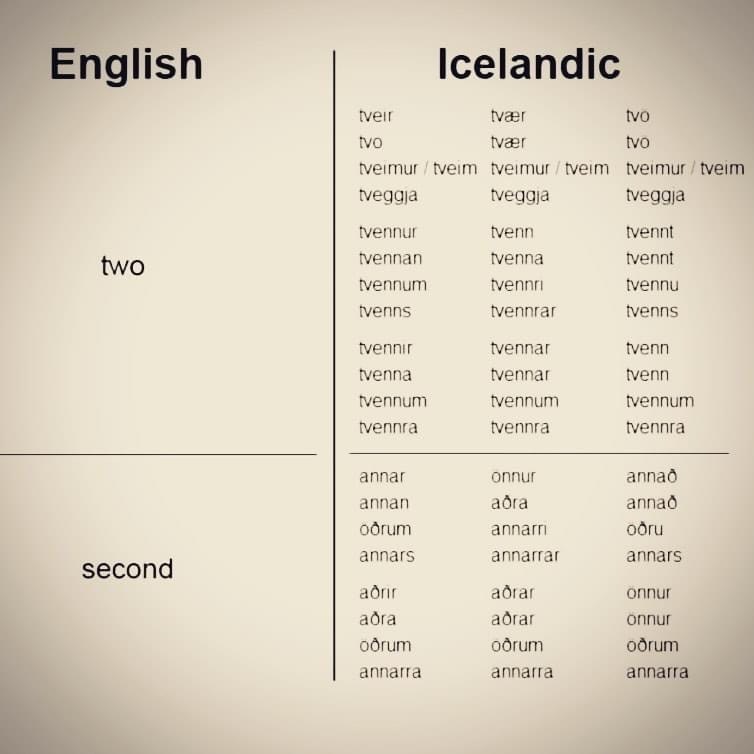 8) Icelandic is an inflected language and modifies words to express different things like an article, gender, voice, case, singular/plural, and aspect. The word for "horse", for example, is hestur. However, it is also: hest, hestinn, hesti, hestinum, hests, hestsins, hestar, hesta, hestum, hesta, hestarnir, hestana, hestunum, hestanna, depending on the context. An example of the complexity of Icelandic versus English grammar for the words "two" and "second" recently spread through the social media channels of those trying to learn Icelandic. In a twist of polyglottal humor, there are "two" and "second" in English, and in the next column, the 60 ways those two words conjugate in Icelandic.

While Icelanders do not think much about these grammatical demands, for those learning the language, it can make your head spin!